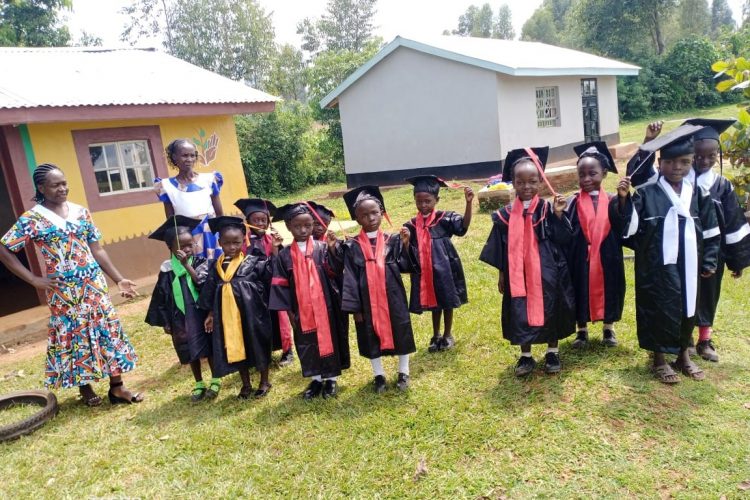 Graduating and moving to a higher level is a dream that the Sharon Nursery Class awaits, aiming to grow and reach the highest education peak.
Regardless of age, it’s a day of joy as everyone gets to add a mark of academic excellence. It’s a dream come true for parents to see their children grow academically from nursery to primary.
On 23 rd of November 2022, pre-primary two pupils of Sharon Nursery were up and joyous ready to mark the symbolic day of transition from nursery and move to primary school.
11 pupils that had surfed their nursery education since 2020 were neatly gowned, ready for the day.
Early in the morning, neat kids paraded in the school compound, ready to
mark the symbolic day and file their first academic certificates.

Parents and guardians were not left behind. They were up early, ready to flower their beloved sons and daughters as they got to file their first certificate marking a day of transition and academic growth. They were seen carrying different gifts and flowers, ready to celebrate the young souls as they graduated.
Both male and female guardians were present on this symbolic day. Smiles were written all over their faces.
Other staff members of Umala Mission joined the day in support of the nursery teachers in crowning the graduates.

Their teacher Mrs. Diphina was up and early, ready to crown the two pre-primary pupils. She was the day’s topic as parents showered her with gratitude for having built the best foundation for their growing young souls.
“My child can now read simple words and write her name. Thank you, teacher Diphina; God bless you. I’ll forever be grateful.” one parent said. “It feels good to see the beautiful souls we’ve mentored graduate and move forward. Its our greatest joy as teachers.” Mrs. Diphina added.

The pre-primary one pupils were included. They were happy to join their schoolmates in marking this great day.
The 11 pre-primary pupils couldn’t hide their joy after learning that they were next in line and would soon mark their day. Their parents were on the front line congratulating the graduating class as they eagerly awaited their day.
The day ended with a fantastic photo session as the kids posed in their gowns beside their parents and teachers, smiled broadly in front of the cameras, and went home, talking of the new schools they would like to join as they moved to grade one next year.

St John Bumala primary, Crownhill CBC center, Highlander academy, and Luru primary are among the anticipated schools the kids will be moving onto.

The Medical Camp held in July increased the community's access to healthcare. The Nasio Trust,…